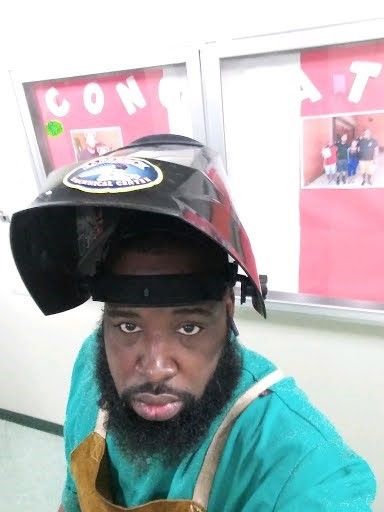 Travis grew up in West Baltimore, just four blocks from the JARC Baltimore training center. Travis is a father of four boys with a baby due this August. His younger brother was tragically killed in 2015, and not long after, Travis was shot in the side during a robbery. “I knew I wanted to make a change and do something to get my family out of that neighborhood. It’s so dangerous that my kids had to stay in the house, and that’s no way for them to grow up, so I knew I needed to do something different.”

Before coming to JARC, Travis earned a Bachelor’s Degree in Culinary Arts and worked as a cook at a few restaurants. “It was very slow profit-wise, and I wasn’t making enough to support my family and get out of the neighborhood. It wasn’t paying me what I needed.”

One of Travis’s childhood friends told him about JARC’s CMP programs. “He told me about JARC on the weekend, and I went to the orientation session that Monday and applied.” Shortly after, Travis was accepted into the program and began in the Fundamentals of Manufacturing program to brush up on math skills. “I hadn’t been to school in years, and I was rusty with algebra. At first, it looked like a foreign language to me, but Jeff, the instructor, taught me everything I needed to know in no time. He made it so relatable that it wasn’t hard anymore.”

Once Travis finished the Fundamentals program, he moved on to the welding program. “Welding always intrigued me, but once I got into the shop, I fell in love with it. Mr. Darnell and Mr. Therman gave me a lot of knowledge. I was apprehensive at first, but they helped me so much.”

Travis took advantage of the supportive services, including resume building and financial coaching while at JARC. “Every single service I received was beneficial to me, and all of the staff were excellent.” He said the financial coach sat him down and set up a step-by-step plan to reach his financial goals.

“I owe JARC my life. I was at a point in life where I didn’t know what I would do next, but all I knew was that I had people depending on me. JARC gave me a trade, and now I’m able to provide for my family. My wife works very hard, and the whole time I was in the program, she was doing everything by herself.”

After Travis finished the program, Maritime Applied Physics (MAPC) came into JARC to look at students’ work. They were so impressed with Travis’s work that they had their HR director open up the training center on a day it was closed so that they could offer Travis the job in person. Travis now works at MAPC as a welder, making ships and aquatic vehicles. “The benefits are great at my current job. I have medical, dental, and vision insurance for my whole family and myself. I also have life insurance plans and a 401K. Being from the streets, sometimes you don’t think about the future till it’s too late, but now I have a foot in the door and can build a future for myself and my family.”

Travis has many goals for the future, and he and his wife are currently in a first-time homebuyer’s class to purchase a house in the next year. They are also in the process of adopting Travis’s nephew, who is the son of Travis’s late brother.

Aside from significant life plans, Travis stays busy and recently bought two welding machines and has several side jobs making air conditioner cages, smokers, and grills in his spare time. ”I now take the skills I learned at JARC and use them outside of work as well.” He mentioned how he always stays business-minded and is even teaching his 13-year-old son how to weld.